We are proud to be exclusive representative for ALLMARITIM AS in India. AllMaritim AS is a leading supplier in the international oil spill response industry and has been engaging in sales and marketing of oil spill response products since 1988. Today, they are recognized in more than 30 countries providing the best possible oil spill response solution to the benefit of our customers and the environment. AllMaritim AS is supported by two main manufacturers, NOFI Tromsø AS and Noren Bergen AS who produce a complete range of products of oil containment booms and oil recovery systems, respectively.

AllMaritim has been involved in major oil spill cleanups worldwide, playing an important role by helping to reduce the impact of oil spills at sea. During the disastrous Deepwater Horizon Oil Spill in the Gulf of Mexico in 2010, AllMaritim had 46 NOFI Current Buster Systems operating with success in the response. An impressive total of 250 Buster systems have been sold worldwide by the end of 2012.

The NOFI Current Buster® technology is one of the world’s most efficient and advanced oil containment and recovery system, capable of containing and controlling oil in up to 5 knots towing speed without losing any of the contained oil. The Current Buster Product has been approved and recommended by Indian Coast Guard in the NOS DCP 2014 Document for use in FAST CURRENTS more than 2 Knots speed.

The NOFI Current Buster® technology is one of the world’s most efficient and advanced oil containment and recovery system, capable of containing and controlling oil in up to 5 knots towing speed without losing any of the contained oil.

Recent trials using one of the NOFI Current Buster® systems together with a BoomVane system, allow the user to use the system as a single vessel sweep system. This towing configuration gives the operator many advantages such as, reduced response time, increased efficiency due to stable configuration, better operating and safety conditions for the user and reduced costs due to one vessel only.

The Current Buster Product has been approved and recommended by Indian Coast Guard in the NOS DCP 2014 Document for use in FAST CURRENTS more than 2 Knots speed. 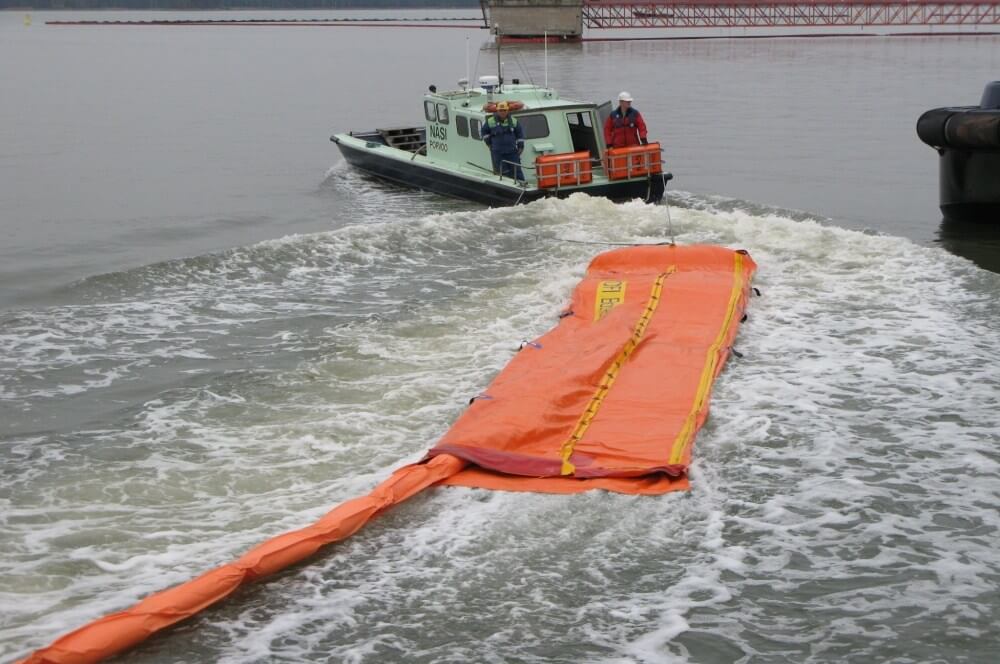 The fastest response system for oil containment in harbors, inlets, sounds and fjords!The speed of the first response very often determines whether the oil spill remains a minor incident, or whether it develops into a more costly spill.

The NOFI Boom Bag is specially designed for fast response with minimal requirements for boats and personnel. The boom is packed in a zigzag pattern inside the NOFI Boom Bag. It is a standard NOFI EP series solid flotation boom, renowned in the market for reliability, ease of handling and ability to contain the oil. The NOFI Boom Bag may be stored on the quayside for immediate deployment or stored in a warehouse for forklift transport to the quay. 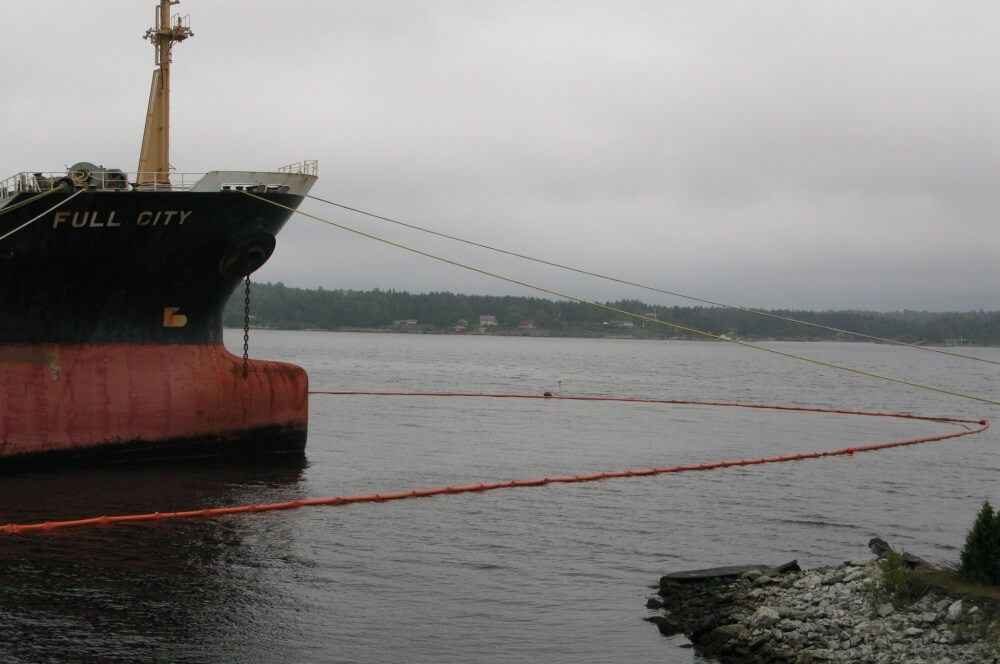 Oil Booms with solid floating bodies.The NOFI solid flotation booms (EP series) are designed for use in harbors, bays and fjords. Thousands of meters of EP series booms have been delivered to customers all around the world.

The oil booms are delivered in standard lengths of 25 m. The combination of a bottom-tensioned boom and flexible segmented freeboard elements give the NOFI EP series excellent wave-following characteristics. This greatly enhances the oil containment capability. The flexible Dynamic Response Connectors between boom sections prevent oil from leaking through, as is often observed on other solid flotation booms using stiffer steel or aluminum connectors. 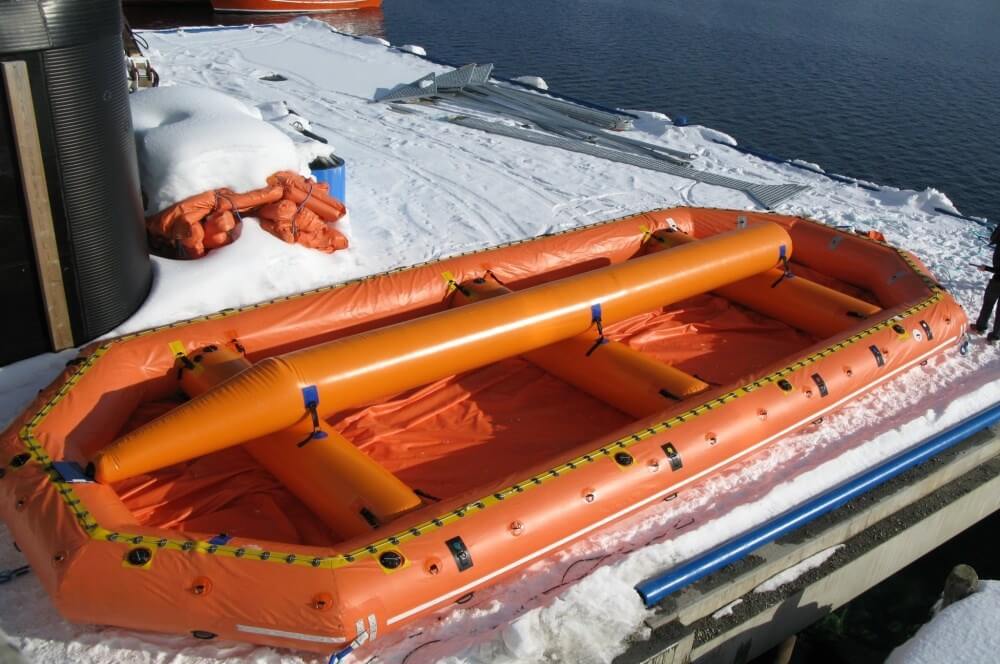 NOFI Oil Barge - temporary storage system.The NOFI Inflatable Oil Barge is probably the most versatile temporary oil storage system available due to the operational features of recovering and discharging the recovered oil to and from the unit. It is easy to use and improved efficiency due to open access and flexibility in choice of suitable skimmer/discharge systems. The NOFI Inflatable Oil Barge is an important contribution to the problem of temporary storage of oil and oil emulsions.

NOREN Bergen AS design and deliver a wide range of skimmers for coastal and offshore use, for light and heavy oil types. The NorMar skimmer is based upon a weir skimmer with self adjustable floating ring. The pumps selected are Archimedes screw- and centrifugal pumps for high capacity and efficiency in various oil types and demanding conditions.

NOREN Bergen AS also manufacture one of the most advanced oil recovery systems available, the NorMar 200TI offshore system. Including all the high tech. features e.g. the integrated crane arm handling the double barrel free-floating hose, the system is able to efficiently recover various types of oil in demanding offshore conditions.